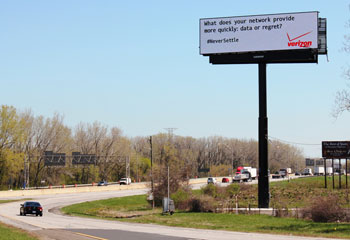 The transition to digital advertising may seem intimidating, but digital billboards remain one of the biggest drivers in revenue growth according to the OAAA. Oakwood Media, a family- owned company operating throughout Illinois, Indiana and Michigan, is one of those companies that  made the transition to digital with the help and guidance of Daktronics and hasn’t looked back.

“For us, going digital was a no brainer,” said Nick Paulson, owner of Oakwood Media. “A hurdle of course, is the cost associated with the product, but we strongly believe that the benefits of going digital far outweigh the costs.”

Oakwood Media got its start when Nick’s father, Wayne, partnered with companies in the area that had static boards. Wayne had property in ideal locations and was inspired to begin his own operation. As the process started coming together, it grew into the family affair that it is today. Currently, Oakwood Media owns one, two-sided digital billboard, but already they’re starting to explore a second and third location.

“We have a good blend of local customers as well as larger national brands,” said Amy Paulson-Breaux, vice president of Sales & Marketing at Oakwood Media. “Verizon has recently been updating their ad copy to change on a weekly basis. It is really great to see them being able to capitalize on the digital product, because for us, scheduling and making copy changes are just a few clicks away.”

Since making the transition to digital, Oakwood Media has started to notice an increasing response from their clients, even those who were hesitant of making the move to digital.

“One of our favorite success stories is from a local builder who we really had to convince to go digital,” said Nick. “He initially agreed to being put on one side of our billboard, and we got him started on a Friday. That weekend he drove by and saw his company ‘all lit up’.He called us that Monday to get a spot on the other side of the board as well.”

A common hurdle when convincing clients to move to digital is proving how digital advertising will generate a return. Oakwood Media emphasizes to their clients the number of eyes that their advertisements are reaching on a daily basis. Paulson sees the out of home market becoming more and more interactive and custom in its public interaction.

“Digital is dynamic; it’s rotating every 10 seconds,” said Amy. “It really captures your attention and doesn’t get lost in that static billboard doldrums.”

The process of going digital was seamless for Oakwood Media, and Nick and Amy credit that ease to those who worked with him at Daktronics.

“We chose Daktronics because of their level of support from top to bottom,” said Nick. “Collin Huber was a great guide for us, and we were thoroughly impressed with all facets of the operation. With Oakwood being a smaller operation, we have had to rely on Daktronics’ support team in many facets. We knew the Daktronics product could stand on its own, but for us, it has been the support overall that has made this process worthwhile.”

This post may interest you: “What to Expect: Installing a Digital Billboard on a New Site.”