The weather is getting warmer; the grass is growing greener and pitchers and catchers have reported; spring training is under way! The new state-of-the-art Ballpark of the Palm Beaches in West Palm Beach, Florida welcomed players and fans for both the Houston Astros and Washington Nationals, along with a new 25’x44’ Daktronics video display in right field. While the teams are getting prepared for the season on the practice fields, the production team is getting prepared for the season in the control room. But, how do you prepare to host two different Major League teams in one venue? And while balancing the amount of time it takes to prepare for a season, how do you ensure you are still providing engaging content for your fans? With a little extra work on the front end, the team at Ballpark of the Palm Beaches has done just that.

Starting with the layout of the board itself, we worked with individuals from both team’s production departments to make sure we could make the video display resemble as closely as possible what they have in their Major League ballparks. Talking through what information needed to be displayed throughout the game, we could develop one set layout that both teams could work with. With space to display both lineups, headshots, pitcher stats, pitch speed, a full line score, as well as zones to display additional stats as needed, the ballpark is providing fans with all the data they want to see during a game. At this point, all that had to be done to completely change the look of the board between teams is display graphics in that team’s look.

Creating completely separate workspaces inside of Display Studio also allowed each team to script the game the way they wanted to. Organizing buttons in a layout that made sense to them, and ensuring content was never accidentally played for the wrong team was super simple using the options inside of Display Studio. With the use of separate workspaces, organizing content into pages, and color coding the buttons, operators can navigate each team’s show with ease.

To assist in providing a consistently top notch, yet simply operated production, Media RTD was used in many different forms. From team logos, to headshots, to marking the current batter in the lineup, Media RTD was used all over. But this presented some challenges with the teams wanting different looks during their games. The Nationals wanting to use a team’s logo, and the Astros wanting to use the word mark instead, we had to find different data fields that could be pulled, and label the content accordingly to allow this. On top of using Media RTD to make life easier, many stats were also pulled based on the current batter and current pitcher in DakStat. This will allow the stats to update automatically when a new player comes in to the game. Once these sorts of details were worked out, it doesn’t matter who operates Show Control for the day, all logos, headshots, etc…. will display automatically without having to be updated before each game, and without having to make a graphic and a button for every player on a LONG Spring Training roster.

All in all, with a little creative thinking on the front end, The Ballpark of the Palm Beaches is providing a production to fans of both teams that makes them feel like they are right in their own ballpark. Working directly with the team’s production departments to get their look correct, and working with the staff at the ballpark to create a show that is simple to operate, The Ballpark of the Palm Beaches will be putting on a top-notch production for years to come. 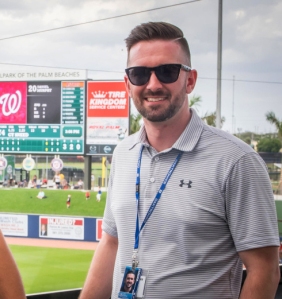 Operating and maintaining video displays and control rooms can be complex without helpful support empowering you to get the most out of your system. Enter: the Control Panel. Comprised of Daktronics application engineers, trainers and account managers, this group specializes in providing support to Live Event and Spectaculars customers around the world. The Control Panel posts articles that grant you the tools and knowledge not just to keep your display in top shape and but also to try new things, with topics ranging from display maintenance to content creation. View all posts by Daktronics Control Panel