* Today’s guest blogger is Vickie Johnson. She’s worked at Daktronics for more than 25 years and has attended NACDA nearly every year of her employment, including more than 20 straight years. 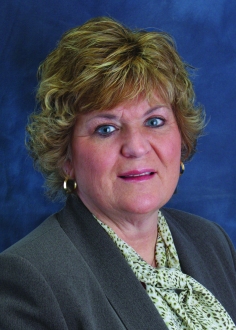 The NACDA Convention has been a big part of my employment here at Daktronics. I’ve been attending year after year to the point where the Marriot Hotel in Orlando, Florida, is almost like a second home.

The first NACDA Convention I attended was held in Marco Island, Florida. It was right on the beach, very beautiful but very small. There were only a handful of booths, maybe 10-12, and they were lined up in the hallway near the lobby of the hotel. Very basic booths, maybe 10 feet by 10 feet with a table and a backdrop.

Back then, Daktronics focused on the products we’d installed by sharing photos as examples of what our company could provide potential customers. Nothing too flashy, but effective for the time.

As the NACDA Convention evolved, Daktronics started bringing more and more product to the show. There were displays by the pool, in entryways and on stages. It sort of led to the customer receptions that we see today.

The location of the convention also bounced around to a few different places in the U.S. before settling into a consistent presence at the Marriot in Orlando, Florida. Over the years I’ve gotten to know the people at the hotel very well. They help make everything possible for the convention and I’m still working directly with some of those people today.

In the early stages of my career at Daktronics, one of my responsibilities included sales for Division II and III colleges. Naturally, I got to know a lot of those Athletic Directors during that time. So when I go to NACDA,  I have a chance to see some of the people I worked with and had sold to in the past. It’s great to see them in their new roles as they continue to move up within NACDA and their organizations.

It’s not only the university contacts but other vendors and exhibitors that I’ve become really good friends with. From NACDA staff to turf representatives to insurance people and everything in between, I’ve developed some really strong relationships. So for me, it’s a great event to reconnect with friends.

As our company grew, we started hiring people to do various aspects of the sales process and I was given the opportunity to transition into the marketing side of things. That led to my role today in marketing where I really enjoy the conventions, preparations and sharing the great things we do.

There is so much activity that goes on behind the scenes of this convention that people might not realize. When attendees arrive, everything already looks amazing and ready to welcome them. As with any event, there are months of planning, weeks of traveling and days of setting up to bring everything together.

I’ve been neck deep in this type of behind the scenes preparation nearly my entire career. When I see everything prepared and making a positive impression during the event, that’s when I know it’s all worth it. And I get to sit back and finally take a breath!

As NACDA has grown over the years, Daktronics has grown with them. We’re now celebrating our 50th Anniversary. It’s amazing to think about. When I started, displays were being made with light bulbs and Glow Cube technology.

I remember bringing a Glow Cube display to set up in the parking lot next to the golf course for one NACDA Convention. It was used for the big NACDA golf tournament that used to take place every year.

Daktronics technology has now evolved from Glow Cube to LED and we’re making displays that are larger than life. We’ve evolved with the convention to hosting customer receptions at the Amway Center with the Orlando Magic and other venues with our LED products near the convention.

This year, I’m most excited about celebrating our 50th year in business. We’ll be showing a short video about how Daktronics has grown from a small company in South Dakota into a major display manufacturer supporting colleges and universities across the country. We’d like to invite everyone to stop by our booth on June 28 at 6pm to watch the video with us and join us in a toast to the next 50 years.

I’m excited to see everyone at the NACDA Convention again this year, so please stop by our booth and enjoy the show!