Iowa State University wanted to turn their entire centerhung LED display system inside Hilton Coliseum into a single canvas for creative content to wow their fans. Installed in 2005, the system consists of four upper displays, four narrow displays in the middle and four lower displays using 12mm, 22mm and 10mm line spacings, respectively. Connecting them for one complete, connected viewing experience was their goal. 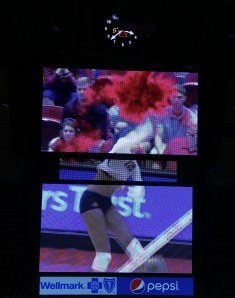 To get these displays to work together as one canvas, the university was able to leverage their existing Daktronics control system without adding any new control equipment. A template for content creation was produced by Daktronics Creative Services who would then unleash their unique skills for bringing a digital canvas to life.

“They’ve had this same displays and control equipment for several years,” said Bryan Perry, Daktronics on-site event producer at Iowa State University. “Our professional services team was able to use the displays in a way that hadn’t been done before in this venue to create an amazing video that has really helped create an atmosphere full of energy for the fans and the team.”

Collaboration with Iowa State Athletics was key in the process as their team is very innovative and open to trying new things with their production. A powder paintball style was discussed and selected as the main design element for the project to bring together the video and graphics.

Our team had to be strategic when selecting video clips and images more conducive to the vertical layout of the centerhung configuration. The final production flowed between full canvas content and using video and images for a single display – upper or lower – with graphic elements shown above and below.

With an on-site event producer on the Iowa State campus, pieces were able to be tested during the production process. Direct feedback was given to ensure everything worked together and looked as expected on the displays. This allowed for minor adjustments of content and clips along with timing and scripting to provide the best possible showing in the arena.

“This new full canvas feature has been a game changer for our department,” said Meagan Arce, marketing at Iowa State University. “Our in-game atmosphere is even more dynamic than it has been in past years.  The entire arena changes when the video comes on, the fans are more electric and the energy of the team changes.”

Iowa State now has a single-canvas video production for every home volleyball match inside Hilton Coliseum. If you’d like to do something similar at your facility, contact professionalservices@daktronics.com.

This article is by Justin Ochsner
in Live Events Marketing.
Connect on LinkedIn or Twitter @jochsner4