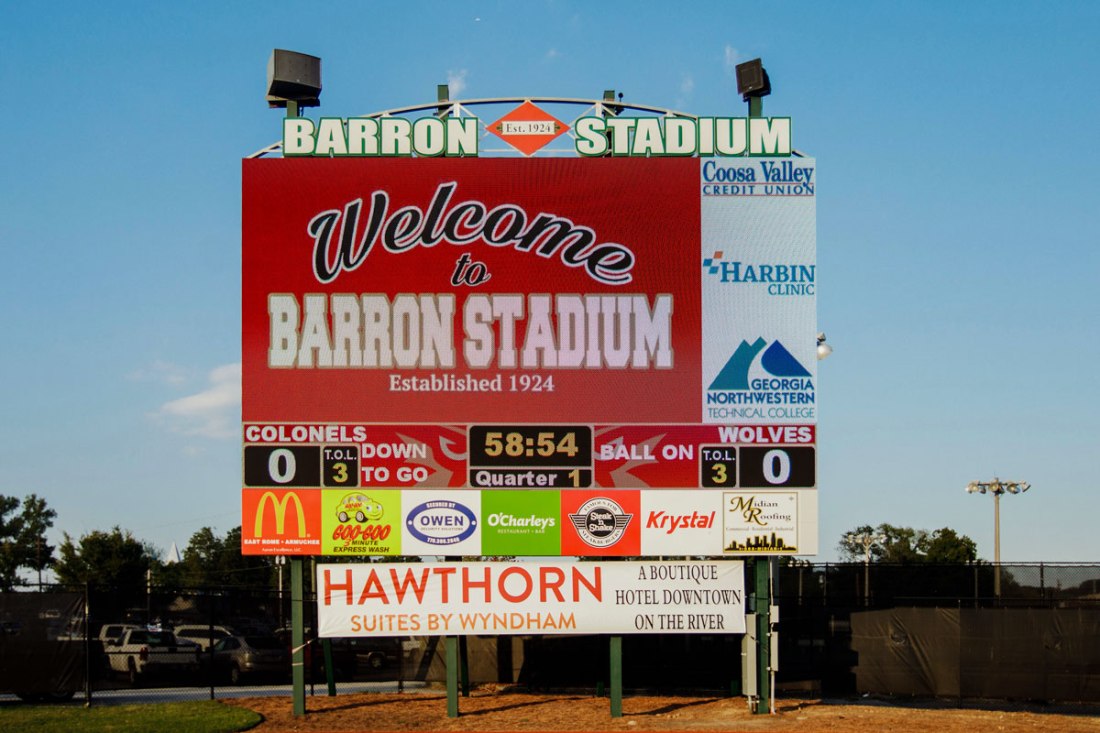 Rome High School in Georgia takes their football seriously; they’ve won 2 state championships back to back and are on track for a third. When the City of Rome learned they would be hosting a double header the first day of the coveted Corky Kell Classic football series, a showcase of some of the toughest teams in the state, they knew it was time to step up their scoreboard’s game.

With a board that was on the fritz more often than functioning, the City of Rome and the school started looking for options. “We had zero confidence our old board was going to work. We could never show up and believe everything would be operational,” explained Matt Stover, Rome City School’s Director of Technology and Network Services. “It was very important to us and the city to get a product that was proven and wasn’t going to fail. The City of Rome owns Barron Stadium, which the public uses as well, so it’s constantly running content. We’ve gotten a lot of comments how beautiful and clear the high def is. It’s very impressive!”

Stover operates the video board and the school is moving steadily toward bringing in student participation for live action in the future. Barron Stadium serves a multitude of events – Rome High School football, soccer, & track events and other public activities; Rome Middle School football games; and Shorter University football, soccer, & track events. This fall, the stadium featured one of the most prestigious and longest-running marching festivals, the “Peach State Marching Festival”, in the state celebrating its 45th year for 2018. When the Corky Kell Classic came to town, it made content scheduling much easier.

“The Classic is a high-profile event for the state of Georgia. We had a tight turnaround to get the display installed just a few days before the Classic, an event capable of producing major revenue for the city,” said Scott Berardi, regional sales representative at Daktronics. “This was Rome’s first time hosting the Classic, and they wanted to nail it.”

With a normal crowd of 5-6,500 fans swelling to 10-12,000 for the Classic, there was a lot to do. “With the new system, we were actually able to take down our old static sponsor ads and replace them with digital ones. We can offer various advertising contracts now and change content on the fly,” Stover explained, “so everything runs a whole lot smoother. No hiccups in operations, which raised our confidence in our content and being on queue. We don’t have to have the same scoreboard year after year. We can customize things for each event, and it’s not hard to do.”

Barron Stadium finally has the technology needed to match their skills on the field. We’re glad to be along for the ride watching the Wolves on their journey toward winning championship no. 3!

View all posts by Daktronics Schools