Keenan Media is an OOH ad company based out of Conyers, Georgia, owned by brothers Brett and Lane Keenan. Their content ranges from traditional business ads to birthday greetings, supporting causes, recognition for accomplishments and so much more.

Daktronics sat down with them to discuss what it’s like to be first-time independent billboard operators and what their experience has been like working with the company.

Daktronics: There are a lot of choices in the market. Why did you choose Daktronics?
Keenan Media: We knew after touring Daktronics that it was a second-to-none choice. They are dedicated in the pursuit of research and development with displays that can stand the elements of our territory. We drove around our area and looked at older displays and could see which would hold up to the test of time.

Daktronics: Tell us about the tour you took of Daktronics. What were your impressions?
Keenan Media: The reliability lab tests were fascinating. We could see they were pushing their products to the limit, recording findings up to the point of failure, if it was even reached. Then they redesign the product to correct that in future models.

Daktronics: And after you started doing business with us, was it what you expected, or what was the experience like?
Keenan Media: Daktronics had a transparent, streamlined process which saves us a great deal of trouble not having to be the middle man coordinating times and dates. They were very punctual and have a great deal of connections and resources in the industry, so we were covered, whatever we needed. We have not had any issues since install and our board is getting nothing but praise and compliments from those around the community.

Daktronics: Let’s talk about that feedback. It sounds like the billboard replaced quite the monument in the area.
Keenan Media: Yes! There was a static shark billboard previously in place that was quite recognizable, so when we started making changes to the structure, inquiries came in right away about what was going on. People from the community have said how nice it looks, and we’ve sometimes observed others sitting nearby just to see what is going to come across the billboard. Because of that local recognition, people are noticing it at an unprecedented rate which should help cement it as a local icon. 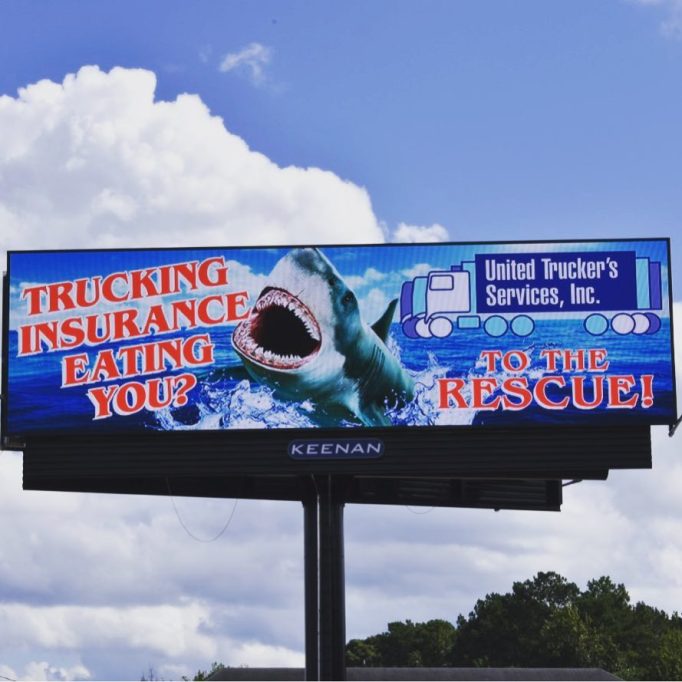 Digital Shark Billboard
Daktronics: How do you plan on keeping media fresh on the board?
Keenan Media: We already run a variety of content on it, from PSAs to local business ads. We are trying to reach out to residents and educate them on the uses. We do have time and weather on there and hope to run real time data or RSS feeds soon! Thousands of passersby will see that each day. We also have a strong social media presence to reach a larger audience. We are constantly networking with businesses and residents to promote the brand.

Daktronics: What results have you seen so far?
Keenan Media: The display is the most eye-catching in the area. Due to this, we have an increased interest in advertising compared to others nearby. We are selling more advertisements and marketing ourselves better. The software is so easy to use that we haven’t had to take any additional time to sit down and learn the functions of the product or how to operate it.

Daktronics: Having gone through this experience, what advice would you give to someone just starting out?
Keenan Media: Obtaining the proper permits was the hardest part for sure! There were many hurdles and obstacles to break through and eventually the hard work paid off. Due to that experience, we feel prepared to handle anything our future endeavors may throw our way. That was part of the ride and will always be the story of how we began.

You’re off to a great start, Keenan Media. We celebrate your success and look forward to a bright future together!