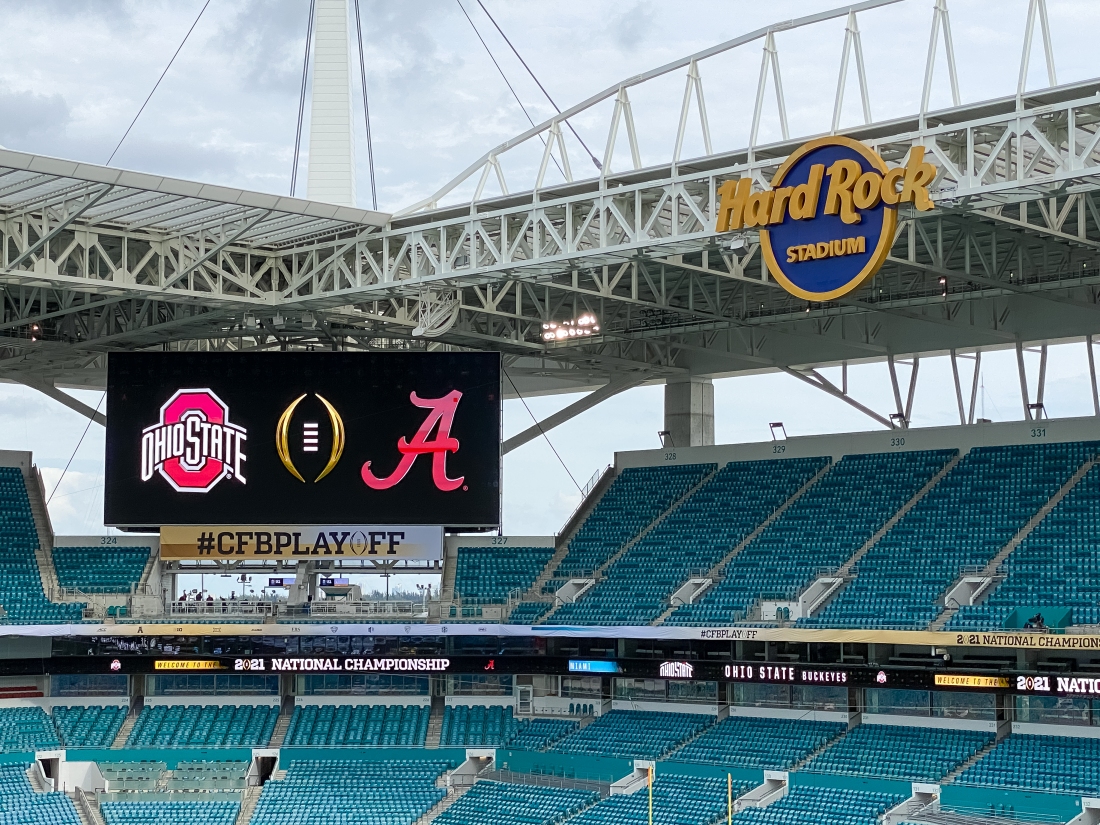 College football this year has seen a wide range of fans in attendance for games. Some schools weren’t allowing anyone to attend a game while others allowed up to 50% capacity. This Monday at Hard Rock Stadium, there will be 16,000 fans allowed to attend the game complete with temperature scans and limited points of entry to the stadium. So for the fans in attendance, and the fans at home watching on TV, I thought it would be good to highlight the equipment that we have at the stadium along with what services we will be providing during the event.

First off, let’s talk about what LED displays will be entertaining and informing fans as they watch the game. Daktronics has installed many different displays at Hard Rock Stadium over the course of the stadium’s history. The largest display renovations occurred in 2016 including four corner video boards, each measuring 49 feet high by 112 feet wide. Since then, we have installed other displays at the stadium totaling nearly 33,700 total square feet. This includes back in 2019 when we installed the largest ribbon board in all of professional sports! That display clocks in at 2,105 feet in length and wraps around the entire seating fascia of the stadium continuously.

Next, let’s look at what services Daktronics will provide to help make sure everything is ready to go for the big game. We will have two game-day technicians and one control room specialist on site to provide both technical support and software support. This includes arriving on site 72 hours prior to the event and doing a walk through of the stadium to check the physical quality of everything from the displays to the delay-of-game clocks. They will then turn on all the displays and make sure that all of the mods are working properly and not giving off any warning diagnostics. Being on site this long before the event allows time to replace/fix anything that might not be working properly and still get it ready in time for the game.

Then looking at the software/control side of things, our control room specialist will help with loading any new content that has been created. Because this is a special event at the stadium, typically they will use the same display zones that have been used for the team that normally plays there. So they aren’t reinventing the wheel, just making sure the content that was made fits those zones correctly and get them uploaded. Once content is uploaded, they check and help build out any new stat frames that are needed. Each event is unique when it comes to stat frames needed to highlight certain areas that game wants to focus on.

Once the game is underway, both the technicians and our control room specialist are on site and available should any issues come up. They have their own dedicated radio channel that the production staff can reach them on if they have any questions or need any help. The group will spend the game in various different areas around the stadium such as the main control room and the press box where another producer runs the ribbon boards using a show control station.

After the game is over, we’re always looking to improve on how things went and what can we do better for future events. Because of this, our crew stays after to meet with the production staff to go over what went well and what we could improve upon next time.

The ending of this game will be different than previous years. Usually, this marks the end of the college football season on all levels, not just FBS. This year, because of COVID-19, this will not be the case as there will still be college football this spring as some colleges & universities elected to move their fall sports to the spring. If you’re like me, while you’re still excited to watch the game this Monday, you’re also going to be happy for the fact that college football is not over and we still have more game-day action to look forward to this spring.